The Stonemason of Nazareth? 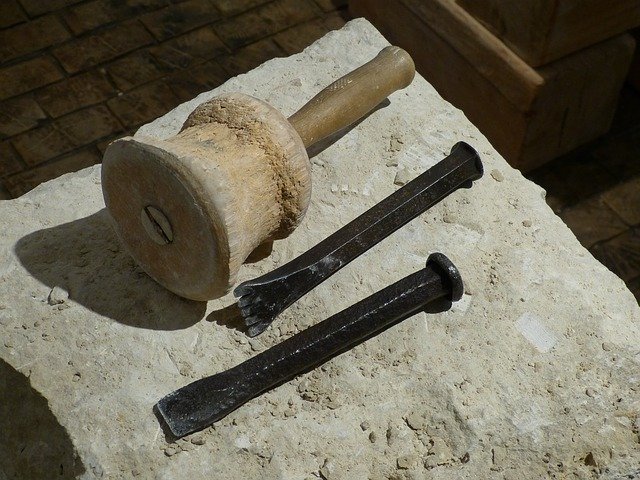 I read somewhere that Jesus was more likely a stonemason than a carpenter.

I know, I know, you can’t believe everything you read. But after some quick research, I’m beginning to believe the above statement.

Correct. But how do we know that’s what the original writer meant?

In the Greek that the New Testament was written in, the word translated as carpenter is tektōn. It refers to an artisan or craftsman, a worker in wood, iron, stone, or copper; it could mean a carpenter, a mason, a builder, a teacher, an engineer, perhaps even a smith.

It is possible that Jesus and his “father” Joseph were actual carpenters, working with wood, carving, hammering, etc.

… However, a quick survey of northern Israel’s landscape reveals that the job of carpenter may not be the best fit for that Greek word.
The majority of homes in Israel, as noted by Hebraic scholar James W. Fleming, are constructed with stone. Fleming explains: “Jesus and Joseph would have formed and made nine out of ten projects from stone either by chiseling or carving the stone or stacking building blocks.” (i) Does this mean that Jesus never worked with wood? While we can’t say conclusively one way or the other, the fact is that a man attempting to make a living as a wood carpenter would have had a challenging time because trees were, and still are, relatively scarce in that region.

Robby Gallaty, “Was Jesus a Carpenter or a Stonemason?”

In Robby Gallaty’s article, he also points out that there was a stone quarry near to Nazareth, where Jesus’ family lived. (As well as other observations, but I won’t get into those really.)

So maybe our notion about Jesus’ occupation–our belief that He worked with wood–is just that: a notion.

But either way, y’all, it’s interesting.

I mean, imagine Jesus as a carpenter. Working with wood, nails, hammers–a constant reminder that a hammer would pound nails through His flesh and bones into the wood of a rugged cross. He most likely got splinters, and maybe that reminded Him that one day splinters–big ones–would be digging into His back and arms and legs as He hung there naked and gasping for breath; maybe they brought to mind the thorns that would be crammed onto His head, pressed into His scalp and forehead.

And imagine Jesus as a stonemason.
First off, He was called the Rock, the Chief Cornerstone, the Foundation. Over and over throughout the Bible, Jesus and God are referred to as a rock. Today we sing that song “The Solid Rock,” proclaiming that we’re relying on Jesus and trusting in His grace and protection.
Second off, working with stone means chiseling, shaping, sometimes breaking the stone. And Jesus does the same with people: He chisels away at them, shaping, sometimes breaking, turning mostly useless blocks into masterpieces, using them to build His Church (1 Peter 2:5). Do you think He ever was chiseling out a bowl or something, or was building a house, and paused to think about how He’d turn you into this and shape me into that?
And this is kind of a bunny trail, but I’ve got the time to walk down it. 😁 Jesus changed the name of one of His disciples from Simon to Peter, meaning “a stone.” We always think of that as a reference to Peter being a foundation on which the Church would build. Or perhaps more of a cornerstone, since Jesus is the Foundation. Anyways, while I believe that’s true, I’m also beginning to look at it differently. Perhaps Jesus was also referring to the fact that Peter needed to be “chiseled,” needed to be worked on, shaped and carved into a masterpiece–by the Master Mason.
Jesus is also called the Root/Branch of Jesse (Isaiah 11:1, 10; Romans 15:12), and was nailed to a cross made of wood, which is often called a tree. When trees grow in rocks, the rock will yield to the pressure and often be split. He’s called the Water of Life; water will erode rock, change and mold it, even break it apart. And He does this with people: breaking, changing, molding–all for good, for their benefit, for His glory.
(Okay, so that turned more into a deer trail, but we’re back on the main path now! 😄) Third off, if Jesus was a stonemason rather than a carpenter, it’d make more sense why there are so many references to rocks and stones and stuff like that, but not quite as much about wood and trees and such. You see, Jesus drew from physical life to teach things about spiritual life; He used illustrations that we humans could understand, could see and know and comprehend. It’s like my pastor, often referring to dog-raising or farming or being a father–it’s what he’s used to, what he knows and understands; I think Jesus would often refer to what He knew and was used to.

I’m not saying Jesus was for sure a mason; He could have been a carpenter–or maybe something else. We won’t know exactly until we get to heaven and can ask Him.

But I’ve been on and off thinking of changing some of my beliefs, some of the ideas and the way they’re represented. The Nativity scene, for example–one of the things that isn’t correct (according to the Bible, no less) is that the Wise Men are present at that time. Another misconception we tend to struggle with is picturing Jesus as a white, well-groomed man–He was a Palestinian Jew, peoples, back when they didn’t have electric razors, and most men (and women) worked hard and spent a lot of time outside!
Sometimes I almost wish I could forget everything about the Bible, everything I’ve ever learned or thought about Jesus and Christianity; and then learn it all anew, straight from the Bible (and Bible tools, such as a Hebrew-Greek concordance so I can see the meaning of the original words). No preconceived notions. No influence from others’ beliefs or the world’s portrayals. Just God’s Word and His Spirit.

I’ve heard that no matter how many times you read the Bible or how well you think you know it, there’s always something new, something you’ve never thought of in quite that way before. And I have experienced that already. I hope I keep experiencing that.

Anyways, what do you all think? 😊