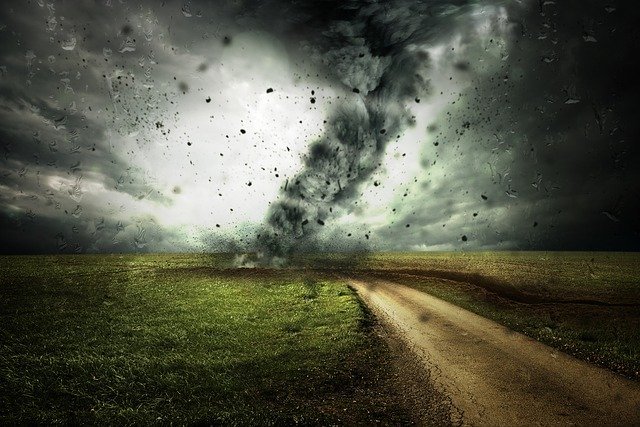 The last time He said something was in chapter 2. For 36 chapters, He has been silent! Job and his friends for thirty-six chapters have been hurting, arguing, judging, and blaming–and finally God talks.

Why did He wait so long? Maybe it was an example to us, showing us that it might be awhile before He “shows up” but that He will speak, and showing us that we might have to wait. I don’t know.

Anyway, it says in Job 32 that Job “was righteous in his own eyes” and “justified himself rather than God.” And now (six chapters later), God starts putting Job in his place. He asks Job a bunch of questions: “Did you do this? Were you there for this? Are you able to accomplish this?” He’s asking him if he can do things that only God can do–so obviously Job’s answer will be “no.” Basically, God’s showing Job that he’s human. Small. Not greater than God.

From out of a storm, the Lord said to Job:

You see that? “From out of a storm.” God spoke to Job from out of the middle of a storm–a whirlwind, in the King James Version.

First, I think of (physical) storms as a sign of power and majesty. So to think that God was in that–was the cause of that. . . As that song by Rich Mullins says, “Our God is an awesome God.” (Great, now it’s going to be stuck in my head. Oh well, at least I like it. 😁)

Second, God was in the storm. We often talk about going through storms, being stuck in a storm. . . But have we ever stopped to think that God’s in the storm with us? That’s so cool! I mean, yeah, we’re in a storm, surrounded by a raging whirlwind, stumbling in the dark–but God, the Creator of all, the Ruler of the universe (including the storm), is there with us.

Have the gates of death been opened unto thee?…

What popped into my mind when I read this verse was Jesus. He died, walked through the “gates of death.” But then He destroyed them. He rose back to life, was (and is) victorious over the grave. Jesus said that He has the “keys of hell and of death” (Revelation 1:18, KJV). The gates had to open to Him, not just because He was dead, but because He was God; He was forcing them to open, to let Him get in and get those keys and then walk back out.

So to sum these ramblings up: