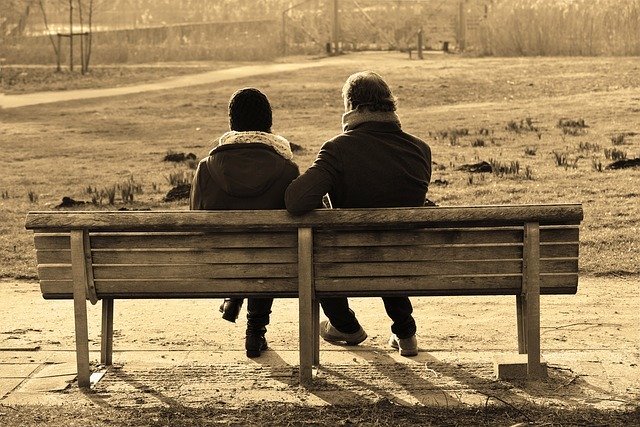 Satan comes again to God. God again brings Job up, repeating what He said the last time and adding “and he still is doing right, worshiping Me, even though you’ve taken away almost everything.”

…Skin for skin, yea, all that a man hath will he give for his life. But put forth thine hand now, and touch his bone and his flesh, and he will curse thee to thy face.

Skin for skin? What does that mean? The CEV translates it as “There’s no pain like your own.” So basically Satan’s saying, “Yeah, Job’s hurting because he lost everything, including his precious children; but he’s probably relieved he’s still untouched. Just wait until I physically hurt him; wait until I take away his health. Then he will curse You.”

And God lets him. The only condition was that Satan couldn’t kill Job, couldn’t make him die.

Satan inflicts Job with boils all over his body. I get the idea that these were painful sores filled with pus, all over his body–on the bottom of his feet, on his chest and stomach, on his back, on his face, on the top of his head!

Then Job takes a piece of pottery to “scrape himself” (probably to squeeze the pus out. Sorry, but that’s what I think!) and sits in a pile of ashes (a sign of mourning or repentance back then).

Now we’re introduced to Mrs. Job. We really don’t think about her that much, perhaps because she’s only mentioned for two verses. And the verses don’t paint her favorably: she tells Job, her husband, to curse God and die.

Whoa. But I can kind of understand her words; I mean, think about it. When Job lost his animals and servants, she lost them too. Job’s children that were tragically killed when the house collapsed? Those were her children too. And now her husband, her love, is suffering physically. She tells Job to just die, to stop suffering, to keep her from watching him suffer.

Did she mean give up, give in to death? Or did she mean commit suicide? Doesn’t really matter I guess–Job tells her she’s talking like the foolish women. “We accept good from God,” he says. “Shouldn’t we accept evil as well?” (Those words of his are a sermon in themselves. But I’ll let them do the preaching, at least for today. 😉)

And now three other characters come on the scene: Eliphaz, Bildad, and Zophar–Job’s friends. It sounds like they were different places, and “they came every one from his own place” (Job 2:11). It’s possible they traveled quite a distance–which, in that time, was not as simple or quick as it is today.

Why were they willing to come, to leave their homes and families, to take the risks (like robbers, dehydration, getting lost, etc.) of traveling? They had decided to come mourn with Job and comfort him. Wow! What friends!

And when they lifted up their eyes afar off, and knew him not, they lifted up their voice, and wept; and they rent every one his mantle, and sprinkled dust upon their heads toward heaven. So they sat down with him upon the ground seven days and seven nights, and none spake a word unto him: for they saw that his grief was very great.

They didn’t recognize him at first! Part of the reason could have been because they (possibly) hadn’t seen him for awhile, but I think it was more because his appearance had changed (because of the grief and the boils).

And then they sat with him. Just sat. For seven days and seven nights–168 hours. No one said anything–they didn’t try to tell him it’d be okay, didn’t attempt to comfort him with words about how everything happens for a reason and God is in control, didn’t say “We’re here for you, buddy.” They just sat with him.

Listen up, ladies and gentlemen! You don’t always have to say something to your grieving friends. Just be there. Sit with them. Share in their grief. Actions are important than words; your presence is more meaningful than platitudes. You don’t have to talk to bring comfort. In fact, sometimes talking makes it worse! So zip it; be silent.

…In all this did not Job sin with his lips.