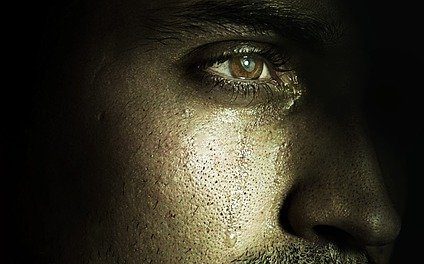 Jesus’ close friend Lazarus was dead. Lazarus’s sisters Martha and Mary were crying, asking Jesus why He hadn’t come when they sent for Him. His disciples and friends of the family were mourning. The stone was over the tomb door, sealing the body inside with the darkness.

I’ve always wondered why Jesus cried. I mean, yeah, Lazarus was dead, but Jesus was about to raise him back to life. And Jesus knew that. He knew Lazarus would walk out of that grave. Knew Mary and Martha would stop grieving and would be reunited with their dear brother. Knew all the friends and relatives would get to talk with Lazarus again.

So why did He cry?

Maybe He was sorry for not coming earlier and preventing this pain (even though He knew it was for good). Maybe He was thinking of His own death, fast approaching. Maybe He regretted having to bring Lazarus back from a world of no pain, no sorrow, no worries.

You want to know what I think? I think it was because He was human. Yes, He was God; yes, He knew Lazarus would live again; yes, He understood this was all for a reason, for a greater purpose. But He was still human. He still felt pain and grief. He still loved and cared.

These three siblings were some of His closest friends. They spent a lot of time together. They talked and laughed together, shared stories, made memories. They loved Him and He loved them.

And so to know that Lazarus was dead, that his sisters were mourning–it made Him cry.

I also think that Jesus, in that moment, looked into the future and saw all the sorrow of everyone who loses a loved one. The sorrow of the mother and father burying their miscarried child; the sorrow of the wife who’s lost her husband and must raise her children without a father; the sorrow of the children putting to rest their father and, soon after, their mother; the people having to say good-bye to their dear friend–He saw all that sorrow, and He cared. He grieved for them.

Just because He knew Lazarus would live again didn’t mean the pain was any less. It didn’t change the fact that hearts had been broken, that a funeral had been struggled through, that people had perhaps cried themselves to sleep.

But there was hope. I don’t think at that time people could go to heaven (because Jesus hadn’t died and opened up the way)*, but for us Christians today… We have hope. We know that, if that person was saved, we’ll see them again. We know that they’re in a better place. We know that one day all will be well. So even while we grieve, there is hope. Peace. Joy.

Jesus wept. And then He called Lazarus out of the grave. 🙂

*I think before Jesus died, people like Noah and Abraham and Moses went to more of a waiting-area. Then once Jesus died (and rose again), they were taken to heaven. The Bible says that sin cannot enter heaven, and these people died before Jesus provided salvation and cleansing of sin. Hope that makes sense. 🙂

← Prev: Light Next: The Touch of the Master's Hand →

“For we do not have a High Priest who is unable to sympathize and understand our weaknesses and temptations, but One who has been tempted [knowing exactly how it feels to be human] in every respect as we are, yet without [committing any] sin.” – Hebrews 4:15 (AMP)

I know this is referring more to temptations, but it very clearly demonstrates that Jesus was very much human and felt the same things we do.

I’d love to see you put Scripture references to defend your arguments. 🙂

I don’t know Old Testament references about people going to “a waiting-area” as I said, but I know they talked about going “down to the grave” (which would have been Sheol or Hades, the world of the dead). Then in the New Testament, Paul talks about the return of the Lord in 1 Thessalonians 4:13-18; he says that Jesus will bring with Him those that are dead in Christ, that He will descend from heaven, and that Christians still alive on earth would be “caught up together with them in the clouds.”
I suppose I should do some research. 🙂