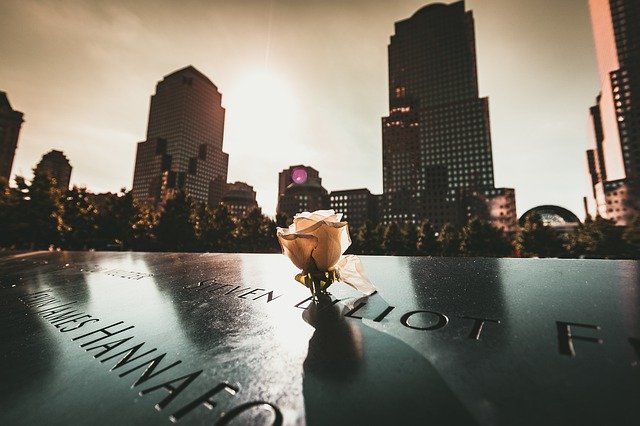 Across the United States, flags will be lowered; people will remember and grieve. It’ll be talked about on television and the radio, written in newspapers, mentioned in so many conversations.

The next words I type are with gentleness and love. Is it good to remember like this?

I understand 9/11 was an absolute tragedy. I know people died–almost 3,000 (2,606 of which were in the World Trade Center and its vicinity)–and others were injured (over 6,000). I realize people lost spouses, parents, siblings, children, other relatives, and friends. My heart aches and my eyes fill as I think of all the pain and sorrow and confusion and loneliness.

But that’s just the thing: I wasn’t even born at the time, I lost no one in any of the attacks; and yet, still, somehow, it hurts me. I can’t imagine what it’s like for those who did go through it and had loved ones die.

So is it good for us to remember it? Good to talk about it and read about it and hear about it and think about it? People sing that song “I’m Proud to Be an American.” But is there any pride in recurrent grief? In lowering the American flag for an entire day? In looking back to when the Twin Towers collapsed and people died and sorrow struck the States? In constantly reliving and remembering? In reminding ourselves of the tragedy and fear and hate and evil? In teaching the next generations all about it, and perhaps instilling fear and grief and hate in their hearts?

… the living should live, though the dead be dead, …

I’m sorry if you lost someone in the attacks; my heart goes out to you. But we can’t stop living just because someone died. I know it hurts, I know it’s hard. I can’t say I understand, because as I’ve said before, I haven’t yet lost anyone really close to me; I’ve sat through funerals, and I’ve seen sorrow, and I’ve cried over the deceased and the left-behind–but I don’t really understand what it’s like.

But Jesus understands; He’s there; He cares. He longs to still your soul and heal your broken heart. And Jesus gives life. Jesus gives hope. Jesus gives joy, peace, comfort, strength, love–whatever you need. He tells us, “One day, I’ll wipe every tear away; there won’t be anymore sorrow or death or pain” (Rev. 21:4).

In a Dinka village in Sudan, more than a hundred people were brutally killed by “government-backed soldiers.” Huts were burned, crops destroyed, families ripped apart and murdered. It was a sad, dark time. But some of the women survivors tied sticks into the form of crosses and pressed them into the ground.

… Not as memorials to their grief but as declarations of their hope. They were Jesus followers. The crossed sticks expressed their living faith in a loving God who could and will make sense of such a tragedy.

Crosses.
A structure used by the Romans to torture and kill. A marker along the road showing where a car-accident-victim died. A gravestone. A symbol of pain, sorrow, and death.
A structure whereupon the Greatest Being died to save mankind. A marker proclaiming “I believe in Jesus.” An expression of “living faith in a loving God.” A symbol of hope, redemption, healing, forgiveness, love, and life.

I’m not saying it’s wrong to remember. We need to remember and mourn! But we also need to move on. To let go of the past and its hurts and hates, and press forward. Mourning + moving on (+ God) = healing.

Remember ye not the former things, neither consider the things of old.

*in a gentle, compassionate, loving tone* It’s been nineteen years, peoples. People responsible for the attacks are dead. Grieving and reliving aren’t going to bring any corpses back to life. It’s okay–and expected–to spend time in the night, in the valley. But we shouldn’t stay there, shouldn’t consistently return.

As Christians, we’re supposed to be people of light and joy and love and peace and life. Yes, we’ll still feel pain and sorrow (we’re human, after all), but because of Jesus and salvation and all the wonderful promises (including that of abundant, eternal life) we don’t have to get bogged down with depression and stuck in despair. We have so much more to look forward to than just this earthly life.