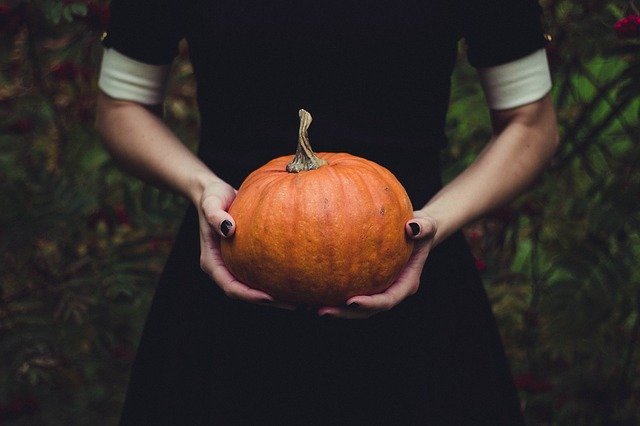 Halloween is a popular holiday here in America (and in some other countries). In fact, it’s the second-largest commercial holiday (right after Christmas), with Americans spending an estimated 6 billion dollars annually (on costumes, candy, decor, etc.).

It originated from Samhain (sow-in), a Celtic holiday when ghosts were believed to return to earth; there were huge sacred bonfires, upon which sacrifices to Celtic deities were offered.

On the night of October 31, the Celts’ priestly class called the Druids would engage in grizzly human sacrifices. These included having their victims bob for apples in cauldrons of boiling liquid, burning them in a large wicker cage in the shape of a man, carving turnips and other gourds to be filled with human fat and burned to signal to demons and spirits, and going door to door among the villages to collect human sacrifices.

Is Celebrating Halloween a Sin?

Later on, November 1 was dedicated as All Saints’ Day and November 2 was dedicated as All Souls’ Day; these were days to honor and pray for the dead, with feasts, bonfires, parades, and dressing up as saints, angels, and devils–making an event known as “Allhallowtide,” beginning on Halloween (Hallow’s Eve) and ending on All Souls’ Day. During American colonial times, Halloween celebrations were known for ghost stories, fortune-telling, partying, and mischief-making.

And even people who profess to be Christians celebrate it. They think it’s okay. They put on costumes and collect candy and party. . . Churches host “Halloweenies” and “Trunk or Treats.”

We as Christians are supposed to love God and do good and stand against evil. How are we standing against evil when we’re supporting a holiday rooted in paganism and evil?

Forget the candy. Forget the fun parties and pranks to laugh at. Forget how cute some of the kids look in their costumes.

1 Thessalonians 5:22 tells us to avoid even the appearance of evil (KJV). Does Halloween appear evil? (Nod your head up and down; you know it does.) So why aren’t Christians avoiding it? Refusing to participate in it? Speaking out against it?

I realize there are Christians who do oppose Halloween. My church family, for example, does not celebrate or condone it.

But I realize, sadly, that the opposite is true as well. There are Christians who accept it and take part in it.

And I can just hear some of their arguments.

“Oh,” they say, “we don’t want to hurt anybody’s feelings or make them feel like they’re not accepted the way they are.”
True, we don’t want that; Jesus calls us to love everyone as they are, just like He does (of course, He loves us all too much to leave us the same 🙂). BUT loving someone doesn’t mean we have to be like them or support the things they do.

“Oh,” they say, “this is a way to open doors to witnessing.”
Really? Do you really do any witnessing then? Do you think the kids (and adults) will actually listen, and will want to believe in the God you do; do you think they’ll change? No, because they won’t see much of a difference between you and the world!

God did not put us here to make people feel good, or to try to fit in so we can have “better opportunity to witness” or a “more receptive audience.”

Our lives have been changed, so we can change others’ lives–or, more correctly, lead them to God who will change their lives. We need to stand out, to be different. Paul and Silas were accused of turning the world upside down (Acts 17:6). Will anyone ever be able to accuse us of that, or at least of turning one person’s world upside down?

We were not put here, were not given salvation, were not gifted with the power of the Holy Spirit, just so we could just stay in our little comfort zones and let others stay in theirs! We are not called to be comfortable or to make others feel comfortable (while they’re living in sin)! We are called to change, to be transformed, to obey God even if it means we have to leave our comfort zone. We are supposed to be a light, shining in a dark world, which means we have to be different. We are told to tell others about the good news, to be a witness not just with our words but with our life.

There’s a lie that we have to be like the unsaved in order to win them. No! That’s not true! Moreover, hardly–if ever–does that happen; instead, the unsaved “win” the believers to their side. I don’t think the world even wants the Church to be like them; they want something different, because what they have is void. Empty. Useless. Not-satisfying. The world’s used to lukewarm Christians, Christians who only obey some of the Bible, Christians who are Christians only in the sense that that’s the religion they claim. So what do you think happens when on-fire, full-out, all-in Christians comes along? Do you think the world notices and pays attention? Do you think they actually listen and are more open to the Gospel, because these Christians really believe and are dedicated to what they say they believe? I believe so!

One other, kinda random thought. On Halloween, a lot of people often wear masks or disguise their faces in some way. Wearing masks on Halloween originated back with the Celtics; they wore masks on Samhain so that ghosts wouldn’t recognize them, would mistake them for fellow spirits, wouldn’t harm them (because they themselves looked like harmful spirits), or would be frightened into returning to the underworld and leaving them all alone. To me, wearing a mask like that symbolizes hiding, trying to pretend to be someone else, attempting to keep others from knowing who you are; it gives the idea that you’re ashamed, or fearful, or doing/planning on doing something wrong (like robbing a bank).

Halloween’s coming up, and I’m feeling down.
Can’t everyone see the evil all around?
Halloween’s coming soon, and my heart’s breaking;
It seems this world needs some shaking.
Even Christians (at least, the name they claim)
Are joining in this shame–
“Trunk or Treats” and “Halloweenies”
As a way to be missionaries.
But does it work?
Does letting ourselves shirk
Our duties as a Christian
Make unbelievers want in?
How can we be an example to the world
When good and evil together are swirled?
How is one light
When they’re a part of the night?
“A little leaven leavens the whole lump”
And a little evil ruins the entire clump.
Is this the way God created us to be?
El-Shaddai, break these chains; set us free!
I don’t want us to be half-and-half;
It doesn’t even work. Satan just laughs,
Because he knows it’s all
Or nothing at all–
You desire fully-sold-out servants,
Not hypocritical miscreants.
Make us whole, make us pure,
Make us passionate and sure.
May our lives revolve around
You and doctrine sound.
May we rise to our feet,
And may our hearts beat
Out this new-start song.
May we wait for You, no matter how long.
May we be burning lights,
Never extinguished from this fight.
May we speak up and out,
Putting evil to rout.
You are Holy Emmanuel,
And I’ll not cease to tell–
Even though Halloween’s coming up, and I’m feeling down.